Here’s a great review of the Ozone Zephyr 2013. This is a awesome write up.  So check it out!

In somewhat of a last minute decision, I was stoked to head off to New Caledonia to test the new Zephyr 17m from Ozone. I had used this kite in the past and from what little experience I had on it, I thought that it was amazing in light winds as a kite suitable for beginners only. How wrong I was…

I’ve been on C kites for my whole kiteboarding career and have never even given a bridled kite a decent go. My first few sessions on the Zephyr were in about 5-12 knots. I was absolutely amazed with the performance during these sessions and while kitesurfing alongside test rider, Torrin Bright, we were powering upwind on all sorts of boards; twintips, foils and raceboards. It was truly amazing to see the apparent wind we could generate in these marginal winds. I’m always hesitant to unhook on a kite that is not my own.

I say with complete honesty that the kite did everything that I wanted it to – but it wasn’t just this, it was the stability and solid feel that really impressed me. 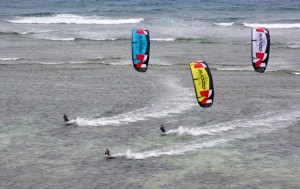 One session particularly stood out for me where there was a consistent 8-11 knots with perfectly flat water – duh! It’s 8 knots!! J. Anyway, I don’t think I thought about the kite once in the session – all my concentration was on the trick itself and not on what the kite was doing. I mean, that’s pretty awesome; it was almost as if it just parked itself right where I wanted it to, and when I did the trick, landed and hooked back in, it was still right there.

I don’t know about you, but this really gets me excited. Can’t say much more about the kite than say that I’m stoked on it. 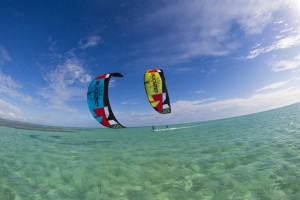 Andy Yates is a highly accomplished freestyle and Wave kiteboarder and also achieved the title World Champion for freestyle in 2010.  Andy is also a excellent kiteboarding freestyle coach who holds freestyle clinics.

Powered By Our Web Presence